Don’t believe it when people tell you that everything you see on screen is just make-believe. As the saying goes “truth is stranger than fiction”. Truth is what fiction is based on. And on rare occasions, the truth is so much better than fiction. Here are eight gorgeous locations you’ve seen in movies or TV shows that are much better seen in person:

1. King’s Landing from Game of Thrones

If you’re a fan of the series, you’ll know that King’s Landing is the largest city in all the Seven Kingdoms. And although King’s Landing only exists in George R.R. Martin’s books, the city you see in the series is Dubrovnik mixed with a bit of CGI. The city is found at the most southern point of Croatia. Much like King’s landing, it is surrounded by the enchanting ocean and filled with limestone streets and baroque buildings with their famous red roofs.

You won’t be able to find the Red Keep here as it was only created with CGI. What you will find are the stone walls that surround the city known as the Walls of Dubrovnik. These are the same stone walls that you’ll see in the series defending King’s Landing. Dubrovnik is also known as the Pearl of the Adriatic and is part of UNESCO’s list of World Heritage sites. ;

One of the key events during Black Panther was the duel between T’Challa (Chadwick Boseman) and Killmonger (Michael B. Jordan) at the Warrior Falls. Believe it or not, the Warrior Falls does exist, its real name is Iguazu Falls—the largest waterfall in the world. That’s right, it’s even bigger than Niagara Falls.

According to the people at the National Park, when Eleanor Roosevelt visited Iguazu, she said, “my poor Niagara”. The falls are so huge that it’s part of both Argentina and Brazil. So, whether you’re visiting one country or the other, make sure to drop by Iguazu National Park — and no, you won’t be seeing any duels there (hopefully).

3. The Temple of the Sun from Indiana Jones and the Last Crusade

Looking for the Holy Grail? You just might find it at the Temple of the Sun. Better known in real life as Al-Khazneh or “The Treasury” found in Petra, Jordan. Lucky for you, there won’t be any traps when you visit, definitely making it an even better and much safer experience than what you see in the movie. The Al-Khazneh is so iconic that you won’t just find it in Indiana Jones.

It even made special appearances in the movies Transformers and Spyhunter. What makes this structure so amazing is the fact that it was entirely carved by hand into the mountain. There are also tons of mystery and myths that surround the site. Many believe that there are hidden treasures within the Treasury. But we will never really know for sure.

Alnwick Castle’s outer bailey is recognizably the place where Madam Hooch taught Harry and the rest of the students to fly on brooms and of course learn the game of Quidditch. The inner bailey of the castle is where Ron Weasley crashed his family’s flying car. The Lion Arch is the very entrance of Hogwarts itself.

5. Alcatraz from Escape from Alcatraz 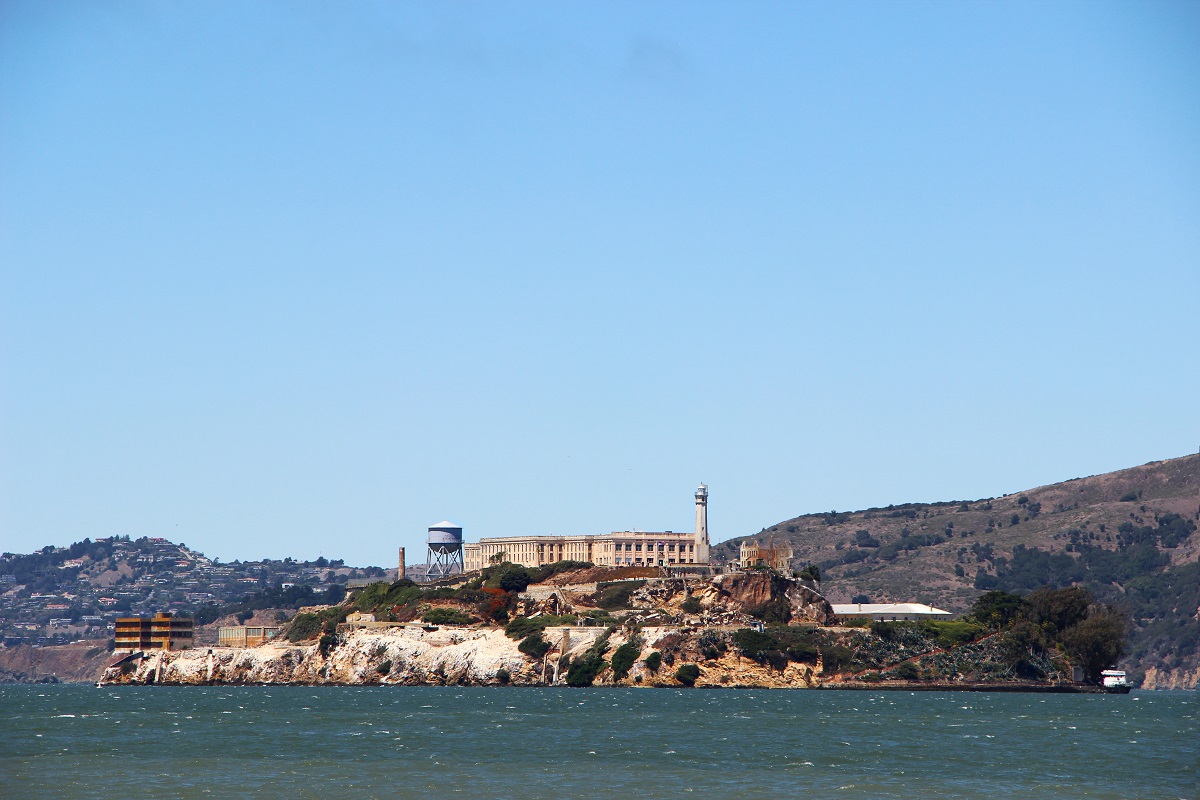 The Alcatraz prison island can be found in San Francisco, California. It used to be known for being inescapable, but that all changed when four inmates did the impossible. I know, Alcatraz can feel a little underwhelming when you compare it to the rest of the locations on this list. And to be frank, it could also use some concrete repair. But the boat ride to Alcatraz and the view of San Francisco from the prison is quite the scene.

There is some nice greenery scattered all over the island as well. You also get to hear the stories of the former prisoners of Alcatraz. They were known to be the toughest and meanest criminals of them all. They even had a famous mafia boss, Al Capone, as one of their prisoners.

6. Paradise Falls from Up

You probably cried when you watched Up. We all know it was Carl and Ellie’s dream to live on top of Paradise Falls. And if it became your dream as well, then lucky for you, your dream just might become a reality. Paradise Falls was based on the existing Angel Falls in Venezuela. And although you can’t fly your home on top of it and live there, you can visit it—on foot or by car, definitely not by flying house.

7. The Shire from Lord of the Rings

The Shire is very much real, and it’s tiny too. Lord of the Rings fan or not, visiting Hobbiton in Matamata, New Zealand is an experience not to miss. It’s 12 acres full of flora and greenery, it even has a lake. It’s very much what you see in the movie. You even get to experience a banquet fit for a Hobbit if you want to. They also hold festivals and different events throughout the year that’ll allow you to experience what it’s like to be living in the Shire.

Last but not the least, Jurassic Park. The movie was filmed in several areas within the island of Kauai, Hawaii. Namely, Hanapepe Valley, Na Pali Coast, Olokele Valley, Puu Ka Ele Reservoir, Valley house Plantation Estate, Mount Wai’ale’ale, and Kuhio Highway. You definitely won’t find dinosaurs here, but you will find beautiful pristine beaches, a thick rainforest, valleys, several waterfalls, and canyons. There are tons of things to do on Kauai island. It’s great for nature lovers and people looking for adventure. So, if you’re visiting Hawaii, make sure to drop by Kauai island and visit the spots where they filmed Jurassic Park.

Sadly, you can’t visit these places anytime soon due to the COVID-19 pandemic. What you can do while waiting for things to get back to normal is to rewatch some of these TV shows and movies. And if you haven’t seen these films yet, what else are you waiting for?