In any story, it’s the plot and the characters that instantly reel you in. But appeal in most fantasy books and fairytales is the setting: the magical world built by the author — the imaginary lands that provide an idyllic escape from the humdrum of daily life. These fantasy worlds, from enchanted forests to magnificent castles, are so exquisite and vivid; they stay in your memory well beyond childhood.

Netherland, Narnia, Rapunzel’s tower – these enchanting locations are just so intricate, it’s easy to think they don’t exist in real life. But believe it or not, there are real, dreamlike places on earth that can give fantasy worlds some stiff competition.

Here are some real-world places that look like they were ripped straight out of a fairytale book (and yes, you can visit them!):

If Gepetto had dabbed into town building, Tiblisi would probably his life’s work. Tiblisi is an old town in Georgia. In its center sits, surprisingly, a quirky new clock tower. RezoGabriadze, a puppeteer, collected bits and pieces from ruins and abandoned buildings in Tbilisi, Georgia, and turned them into the colourful, higgledy-piggledy landmark.

Wizards and magical beasts are a thing of children’s books, if you see the Wistman’s Wood at Devon, England, you might change your mind. The ancient forest, devoid of any human or animal intervention, has been left to grow wild and unfettered. With rocks stunting the growth of trees, the now old and gnarly branches have become so crooked, they hang down to form an oppressive canopy.

The forest is also home to moss-covered boulders. Combined with the twisted, ancient brambles of Wistman wood, tales of ghosts, druids, and other supernatural sightings surround the forest. It’s all myth, of course, but it’s easy to see the reason Wistman’s has become a magnet for such stories. 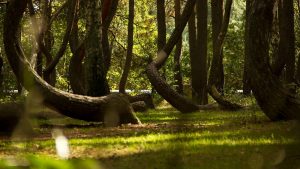 Poland’s Krzywy Las, or “Crooked Forest,” is a cluster of 400 mysteriously bent trees. The trees hover just a few inches above the ground, with their trunks taking a sharp, dramatic turn toward the sky. They all round into little J shapes, as they ascend. The about the trees’ amazing shape run the gamut from practical (farmers who looked to make furniture from them stunted their growth some 80 years ago) to bizarre (gravitational pull in the area had been so powerful, it morphed the trees’ trunks.) Despite being bent in their infancy, though, every tree in the forest has grown to be tall, unhampered by their curves.

Well hidden on the Isle of Skye, the Fairy Glen makes you feel as if you’ve been magically transported into the land of pixies. It features unique rock formations, scattered waterfalls, ponds on cone-shaped hills, and interestingly, mysterious spirals.

Enigmatic and beautiful, the Pirate Tower is a seaside tower that looks like the setting for a sad romantic tale. In reality, the lonely spire that had been built into the face of the rocky beach cliff in 1926, belonged to the affluent estate that sat on the ledge. The 60-foot tower reaches the top of the cliff where the mansion is, and inside it is a private staircase that the owners can use to get to the beach. A design flaw has rendered the exit door and some parts of the tower submerged (and therefore unusable) during the high tide, but the tower is still as enchanting as ever.

Did you know that Sleeping Beauty and Cinderella’s castles were inspired by a real place? Neuschwanstein Castle, is the magnificent retreat of King Ludwig II of Bavaria. Dubbed as the “fairy-tale king,” he commissioned the construction of the magical castle in the mid-1800s, as homage to the composer Richard Wagner. King Ludwig was never able to see the castle in its final form, his exquisite taste and unmistakable inclination towards elegant and extravagant designs still live to this day. 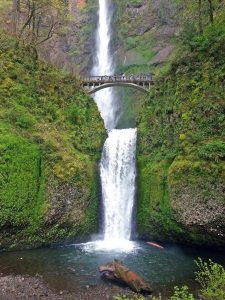 Major fairytale moments don’t just happen in castles – they also take place in bridges. Multnomah Falls looks just like the perfect setting for a dramatic fairytale fight between princes, with its magnificent bridge stretching dramatically over a breathtaking waterfall. It sits right at the Columbia River Gorge in Oregon – an easy drive if you wish to create your own fairytale moment.

Forget about tea lights and LED string lights. Travel to the North Island of New Zealand to visit the Waitomo Caves. The caves are popular for its robust population of stunning glowworms. And they’re not just ordinary glowworms at that. These specific species can be found only in New Zealand. 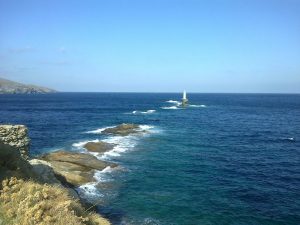 Lighthouses are mysterious and evocative, but very few can compare to the stunning beauty of the Tourlitis. The lighthouse, which stands off the coast of Andros, Greek port city, rises up out of a charming, weather-worn stone spire. While the lighthouse has seen some renovations in the 90s, it retained the winding staircase that has been hewn from the rocks of the tower itself. The staircase, which leads up to the tower door, adds up to the lighthouse’s enigmatic appeal.

When you visit Quinta De Regaleira in Sintra in Portugal, throwing coins to a wishing well will never be the same again. This real, dreamlike well is hidden deep inside a garden. This World Heritage Site makes you think of all the magical worlds that might be waiting for you down there. 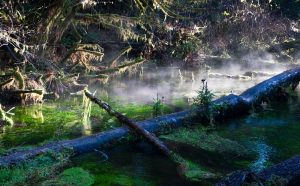 If you are into hiking, put The Hall of Mosses on your list. This distinct hiking trail can be found in the Olympic National Park, in the Hoh Rainforest. The trail lets you recreate your own Snow White moment, as you immerse yourself in giant, moss-covered trees draped in magnificent green and brown. Traverse the main trail, and you’ll see an otherworldly, 200-foot side path that will take you to a magical grove of stupendous maple trees, covered in hanging moss.